How to Identify and Control Spider Mites

It was the start of September and I excitedly sowed my bean seeds.  They sprouted and grew well but just as they started to flower they began to show signs of what I thought was nutrient deficiency.  They had pale mottling across their leaves and lacklustre growth, which didn’t abate with the application of liquid fertilisers so I went in for further examination.  A close look revealed little tiny rust coloured speck like bugs.  Once again I had to refer to my gardening books and the internet, I found the tiny little blighters were in fact spider mites.

What are spider mites? live on the back of leaves I didn’t realise that spider mites had move into my vegetable patch until they had reached plague proportions and infested the back of almost every leaf on my bean vines.

Spider mites have a tolerance to a lot of chemicals but, as they are a soft bodied, insect soap sprays and white oil work well against them.  I chose to use ‘Eco Oil’ as I’ve heard that it is less likely to burn leaves, which I was worried about due to the hot dry weather conditions at the time.  I read the safety instructions, because ‘organic’ doesn’t mean eye and mouth safe, and donned my safety goggles and breathing mask.

Soap sprays and white oils only work if they are applied directly to the insects, coating them, as many insects live on the underside of leaves it’s important to thoroughly check and spray under each leaf on the infected plants, most instructions recommend spraying until it drips from the leaf.  It was a difficult and time consuming job, methodically handling, turning and spraying each leaf.

Five days later, as per instructions, I went out again to repeat the process aiming to kill any new hatchlings and stragglers that may have been missed. 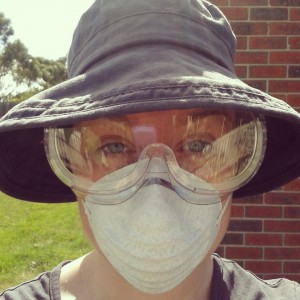 Remember that organic garden sprays may require protective clothing, an example of this would be the use of chilli sprays which are incredibly unpleasant to inhale and get in your eyes

One week after the second application of Eco Oil. I went and inspected my bean vines.  The spider mites had moved back in and seemed to be happily re building their depleted numbers.  With the weather still hot and dry I didn’t want to run the risk of burning the leaves with repeat applications of white oil so I turned to the internet for alternatives.

The easiest and most mentioned alternative to white oil spray for spider mite removal is simply water.  It’s suggested that since spider mites hate humidity they can be kept under control by simply using a fine spray of water from the garden hose to wash them away and discourage their return.

Every day for a week I turned the hose onto a fine but firm spray, you don’t want it so hard that it damages the leaves, and sprayed up and under the vines.  After a week there was a noticeable difference in the numbers of spider mites.

While I never fully eradicated the problem and had to spray the beans leaves every time I watered, it was by far the easiest method and made enough of a difference to see my plants come back from their stressed state and produce a bumper crop of beans.

Eco oil, white oil or soap spray are all effective against spider mites although I believe they are best used at the first signs of an outbreak.  My problem had become so large and widespread that the constant application of sprays was time consuming, difficult because of how large my vines had grown and ran the risk of plant damage because of the time of year and hot Australian sun.

A gardener learns more in the mistakes  than in the successes. – Dodge Borland 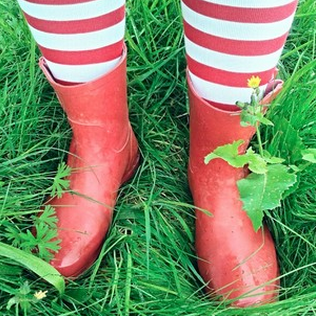 My name is Beth and I like wearing boots! I have been gardening all my life and growing vegetables for two years. My vegetable plot is a small one. I have three, self made, raised beds measuring just over 1 square metre each and an assortment of pots.

Beer Traps to Rid Your Garden of Snails and Slugs – Tested

How to Catch Earwigs that are Eating Your Garden